Michael Lindley’s highly acclaimed mystery and suspense series has now reached #1 on the Amazon Bestseller charts with the first book in the series, LIES WE NEVER SEE also a #1 selection for Historical Mystery and Suspense.

Lindley launched the new series in 2018 with the launch of LIES WE NEVER SEE and the debut of free legal clinic attorney, Hanna Walsh, and Charleston Police Detective, Alex Frank. Their precarious relationship plays out over the four books in the series now as they confront the dark forces of crime and corruption in the Low Country of South Carolina.

“I’m so excited to see the “Hanna and Alex” series continue to grow a loyal fan base of readers.,” said Lindley. “The reviews and comments have been very encouraging.” All of the books are now available in the Amazon Kindle Unlimiited platform and available as a free download for KU subscribers. Kindle Unlimited page reads have exceeded one million in both the past two months.

In LIES WE NEVER SEE, Charleston attorney Hanna Walsh finds her life in emotional and financial ruin when her husband is found murdered and a ruthless stranger thinks she’s hiding millions he'll do anything to get back in this twisting story of mystery and suspense.

An old letter and journal found in the attic of the family’s beach house on Pawleys Island reveals Hanna's distant grandmother, who owned the same house as a young widow during the Civil War, suffered a similar path of emotional loss, crushing betrayal and financial hardship.

Amazon Five Star Reviews for LIES WE NEVER SEE
“Hard to put down… another compelling story.”
“I loved reading every word of it.”
“A thoroughly enjoyable read.”
“Suspenseful to the end.”
“Loved this book!  Never suspected the ending.”

Detective Alex Frank comes to Hanna’s aid and joins the FBI in a frantic race to save all that remains of her fragile life in this twisting story of mystery and suspense.

As the two stories play out, Hanna finds their hopes for deliverance both depend on those they still hold close, but betrayal and ultimate salvation come in many unexpected ways.

LIES WE NEVER SEE unfolds across the beautiful and historic Pawleys Island and Charleston in the Low Country of South Carolina in parallel story lines that trace both women’s struggles and ultimate fate.

Praise for Michael Lindley novels
“… Lindley is a masterful storyteller, effortlessly moving between past and present.”
“… his work reads elegantly and is artfully crafted.”
“… beautifully merges storylines of then and now.”
“… a rising talent.”

If you love mystery and suspense with twisting plots, compelling characters and settings that will sweep you away, find out why readers are raving about LIES WE NEVER SEE. 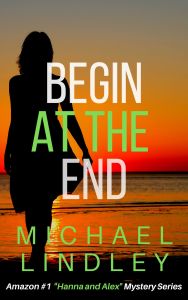