A Year in Review for Michael Lindley Novels.

As we all prepare to celebrate the New Year later tonight, a brief reflection on the past twelve months of the “writing life” and an update on the release of A FOLLOWING SEA on January 11.

The end of 2018 marks the first full year of a new platform and brand strategy for Michael Lindley Novels that has seen dramatic increases in distribution, readership and strong ratings for my past titles, as well as the successful launch of my latest novel, LIES WE NEVER SEE, back in March.  I want to sincerely thank the many partners I’ve had in this process from book editors, cover designers, file formatters, production, distribution and marketing platforms, Advance Reader Copy reviewers and certainly, the many readers who have found one or more of Michael Lindley novels and added them to their bookshelves.

As 2018 comes to a close later tonight, I’m very excited about the year ahead.  With all new cover designs for my past books unveiled earlier this month to reflect a consistent branded look for the Mystery, Thriller & Suspense genre, and the launch of my next book in a little over a week, 2019 will be off to a fast and furious start.

A FOLLOWING SEA will be the second installment in the Hanna Walsh and Alex Frank Low Country Thriller series set in Charleston and Pawleys Island, South Carolina.

It’s been over a year and free legal clinic attorney Hanna Walsh has tried to move beyond the betrayal and violent murder of her husband.  Charleston Police Detective Alex Frank, who helped bring the killer to justice, is becoming more than a friend.  Then Alex’s ex-wife comes back to town with a shocking secret, intent on making up for past sins, and all of Hanna’s trust issues coming racing back.

When Alex’s father is charged with the brutal death of a rival shrimp boat captain and he digs deeper into the crime, he finds himself in the cross-hairs of dangerous killers. As Hanna tries to help with the investigation and defense of Alex’s father, she hangs on to a distant hope that she and Alex can get back together, but his cunning ex and a vengeful crime syndicate have other plans for all their futures.

Look for special launch week pricing on Amazon for A FOLLOWING SEA on Friday, January 11.

Thank you again for a marvelous and fulfilling year in the “writing life” for Michael Lindley Novels.  I hope you've enjoyed the stories as much as I've enjoyed bringing them to life.  The year ahead will include another new book mid-year and if all goes well by December, the launch of a sequel to my third novel, GRAYTON WINDS, the Prohibition-era saga of the Coulter family in Atlanta and Grayton Beach, Florida.

Have a wonderful New Year! 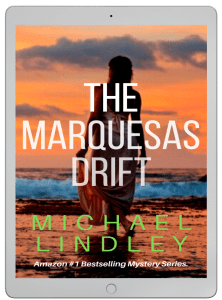